To plunge deeper into the marvellous landscapes of the corazón de Colombia, the coffee region, Alexander had the great idea to suggest a bicycle trip: after a night with the family of Gloria, a sister of Nancy Estella, I left Pereira for three days feeling light with only one piece of luggage.

Shortly after the first peaje, during a break, I observed fascinatedly a crowd of hormigas arrieras carrying large chunks of leaves to their home. They are called after the caballeros driving horses from one place to another and coming back without. I spent the night in the village La Unión known for its large cultures of grapes, directly over the way to a police station (coming with the advantage of a blocked and therefore quiet street).

The next morning I left early attracted by the near mountains. Climbing in the mist initially, I enjoyed later the large plateau around the mountain village Dovio and a great view on the valley of Río Cauca. During the descent, riding to fast in a sharp unexpected curve, I had a little exit into the flora along the way, but nothing serious. In the afternoon, a heavy tropical rain got me wet to the underpants and flooded the streets of the village Bolívar where I passed the night in the center of hospedajes, a lovely old country residence.

With dry socks I started the next day with a detour of one and a half hour searching vainly for a route which was in the map but seemingly not in the landscape. And it was raining again. Knowing the large way ahead, I hurried nevertheless back to Roldanillo, over the river to Zarzal, driving round Armenia, just passing the famous Parque del Café and the two villages of Montenegro and Quimbaya, and finally lost the lucha contre el tiempo, the race against the time: darkness caught me up on the splendid but rather mountainous street to Filandia, just 40 minutes from Pereira. But again, it turned out to my best: luckily, I found a wonderful place to stay and enjoyed the night in a hammock of a little cabaña, listening to the rich sounds of the garden and the nearby woods.

After a way of in total 313km and 4200 altitude meters, I reached Pereira rather exhausted the next morning.

It was a luxuriuos pleasure to end the day on a cozy note together with Nancy Estella in the Termales of Santa Rosa, hot springs in a beautiful landscape with rich pools and refreshing waterfalls. 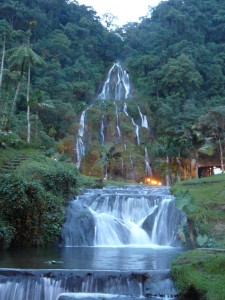 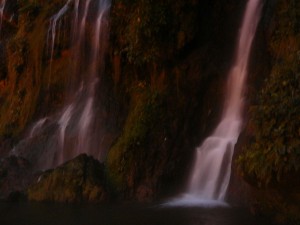