Most of the towns I passed so far on this journey looked all the similar to me, made specific only by the people I met there. Same with Huancayo: an unspectacular friendly town, where I met Aline&Cédric again, coming back from their excursion into the jungle. We continued together for the way to Ayacucho, an easy ride with a climb up to 3900m and then a gentle descent of some 250km along the valley of Río Mantaro. This river traces a narrow band of green into the surrounding desert land of eroded rocks, crooked cactuses and sandy tinted planes. We had a light time together and enjoyed ourselves – life felt free and reckless in this beautiful valley. We camped out three nights in nice camping spots along the way. For the first night we pitched our tents next to a natural pool after an adventurous river crossing in a small cable car. The courteous dueño took us on an evening walk up the steep water formed rocks to some old and rotten mills where we balanced on a 5m high water sewer. It was a refreshing rest, before we crossed the desert valley all in dust the next days.
The traffic on the only radial road into Ayacucho was heavy and gave us a rough ride. We rented a shower there and left the same night in bus to Abancay.
Since my camera broke down, I owe some of the pictures above to Aline&Cédric: many thanks! 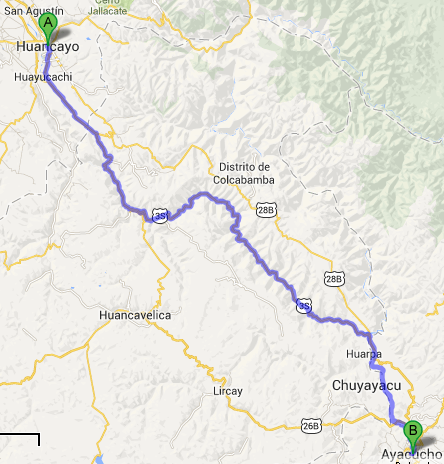