Early in the morning, before 6 o´clock on the road again, with many ciclistas on the opposite direction coming from Barranquilla, friendly greating. One of them turns to accompany me for a while. With its farewell the urgent advice: the next 50km you don´t stop, you don´t buy anything along the street, you simply go on. Even with only two bottles of water for the long way to Ciénaga, I had no appeal to break his counsel when traversing the wooden shacks of the southern suburbs to avoid the traffic of the industrial town: dark figures burning garbage in front of their homes. What then came, was one of the finest landscapes I´ve ever seen: for about 40km, the Ruta 90 divides the marsh land of good old Río Magdalena, the largest colombian river, I´ve met the first time a long and rich month ago, from the sea. On the right hand side sweet water lagunas with cactus and scattered huts, on the left hand side the breaking of sea waves with white spray behind a sandy belt of palms. I felt that it was a godsend to be riding here and could not see enough from all these deep colors of red, yellow, ocher, brown, dark green and bright blue.
Later on, the right side opened up to a larger lake with stilt houses of fishermen.
The remaining 30km to Santa Marta were a mere tedious exercise in the afternoon with forty-one degrees Celsius, but I was vastly remunerated by the warm welcome in the Casa del Ritmo, a beautiful, individually designed hostal, led by the young entrepreneurial couple Ivonne and Giovanni.

Cartagena – Santa Marta: a greatly rewarding way of about 265km with only 1000 accumulated altitude meters at an average speed of 18,8kph. 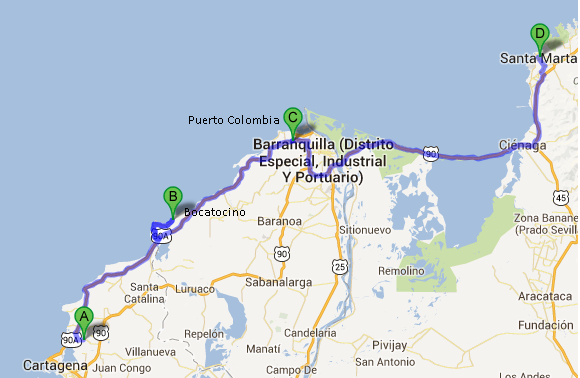